Responsible content on personal finance & economics that makes you smarter about money.

Why is Lending Important for the Economy?

We've all heard the terms - debt, lending and credit at least at some point in time. The three terms are relatively similar and refer to a process in which people with excess capital, loan it out to those who are seeking it for consumption or growing their businesses. While people may have varied perspectives on credit as an important financial instrument, none can deny the fact that it has become an inseparable aspect of the global economy and may well be what triggered the global economy into growth and expansionary mode. Before the practice of extending credit emerged, it was the norm that you had to steal or plunder to increase your wealth i.e. increase in wealth came at the cost of a decrease in someone else’s wealth.

The credit system has been in existence for long. However, its availability had been a cause of concern unless modern institutions like banks emerged. As Yuval Noah Harari puts it, “It was hard to get a loan in the pre-modern world, and when you got one it was usually small, short-term, and subject to high-interest rates. Upstart entrepreneurs thus found it difficult to open new bakeries and great kings who wanted to build palaces or wage wars had no choice but to raise the necessary funds through high taxes and tariffs.”

Imagine a world without the concept of credit! Most of us would be living in rented apartments, stacking cash to buy the dream house at the age of 60! Banks would exist, but again, we'd be paying to keep our money in the banks, something that's not the case right now.

The concept of credit emerged slowly with people amassing huge wealth looking to lend it out for those needing money for farming and agricultural activities. Slowly, money lending became a profession with people loaning it out in return of profits. Hence, the concept of lending and crediting isn't new.

How Credit Expands the Economy

Borrowing from an example shared by Harari, let’s see how credit expands the economy:

Say, what would you do if you wanted to start a bakery and you didn’t have money? You would simply approach the bank.

Now, where does the bank get its money from? Simple, from depositors.

For instance, a contractor has deposited $1 million of his earnings with the bank. This deposit is then passed on to the baker as a loan.  Now the bank as $0.

Now suppose if the contractor tells the baker that the contract with cost another $1 million. The baker will again approach the bank for credit. After availing credit, the amount is again provided to the contractor as his fees.

He then deposits the amount in his account. This means, the contractor now has $3 million in his account, while the bank still has $1 million in its safe. How does the bank then bridge the gap? By simply ensuring that the baker pays the loan along with interest once her business is up and running.

Debts can be classified into good and bad ones. Good debt refers to an investment such as a mortgage, or student loan and is availed to purchase something that will go on to increase the value or contribute to the overarching financial health.

As Charles Wheelan puts it, “Debt is a good thing only if you do something sensible with the borrowed funds. A student who takes out loans to finish medical school will be fine once he becomes a surgeon. But if you borrow money to drink beer and eat pizza while living in your parents’ basement—literally or figuratively—it’s going to be a problem. This is where the wonder of credit becomes the “debt burden.”

On the other hand, bad debt is used for the purchase of material things. This could include credit card debt and extremely high-interest loans. Bad debt does not provide exceptional returns on your investment in the long run.

Why is Debt Good?

Ever since the Great Depression in the 1920s in the US, debt has been seen with utmost precaution. Indeed, trillions of wealth was wiped out almost a century ago. It also led to joblessness. However, the misconception around debt is uncalled for. Debt as an instrument is good for personal finance as well as the global economy.

Many people today use credit cards for personal or business needs. Startups kickstart their operations and continue to operate for years simply on investor money. Students leverage debt in the form of educational loans. Most things related to finance are today an important instrument of debt.

To simplify it, issuance of debt is a way of paying for useful things. It wouldn't be wise to keep your capital stacked in your bank when there are families willing to pay for making the good use of your money. Not just at a small scale, countries like the U.S.A. too, rely on debt. In fact, debt helped the U.S.A. to win World War 2. 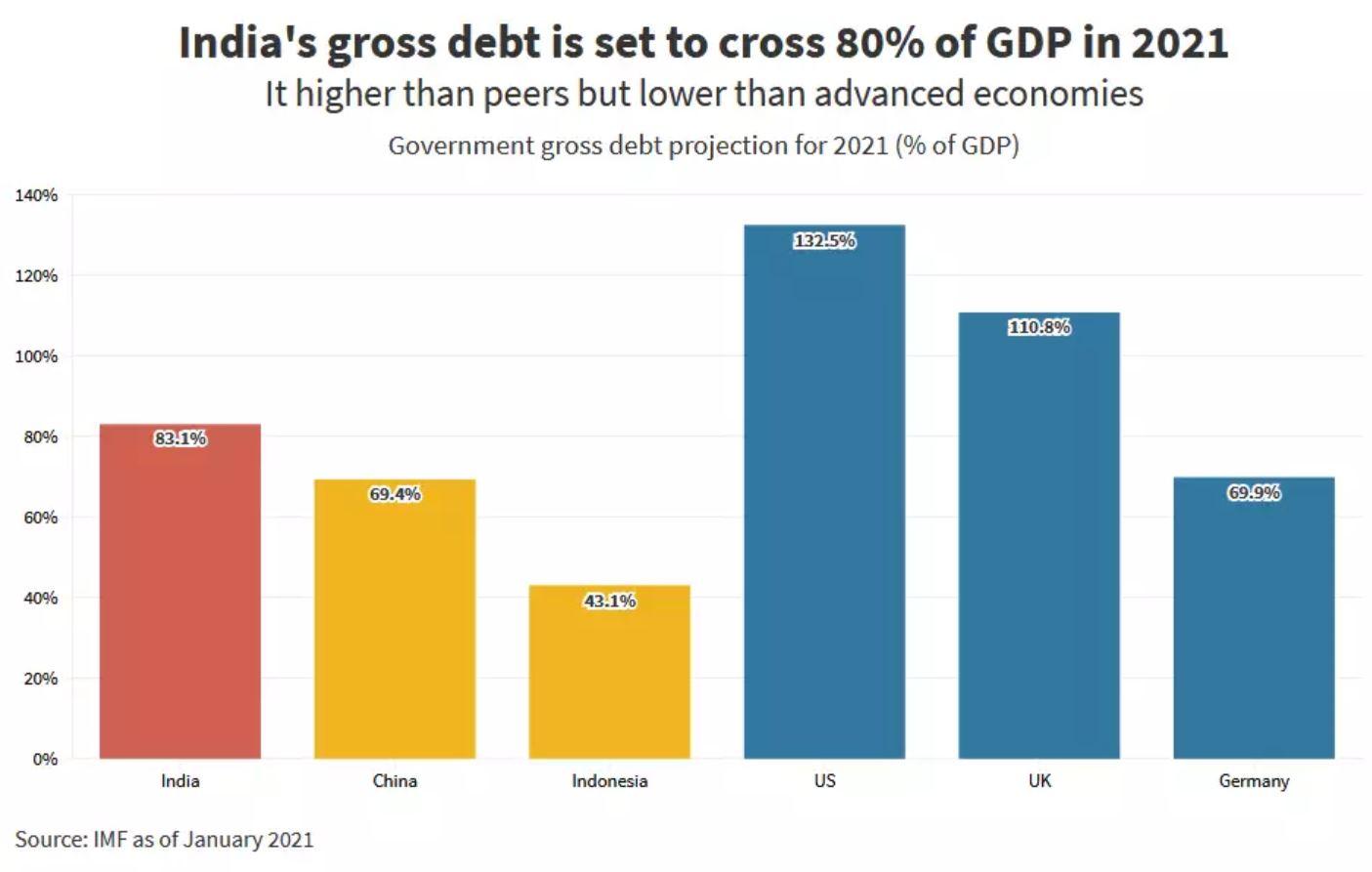 When compared to other developed economies in the world, India does not have the credit institution in place to support the real economy. Bank lending, as a percentage of GDP, has ranged from 51.9% in 2011-12 to 56% in 2020-21. Hence, India has a higher yield, which does not necessarily mean bad borrowing practices. It simply means that the demand for credit heavily outweighs supply.

Many times, people and businesses find it difficult to reach out to credit lending institutions. Moreover, the involvement of intermediaries in the credit market and the higher cost of lending hampers the businesses and individuals to access credit,

Hence, when compared to a country like the U.S.A. and China, the Indian credit delivery mechanism has lagged behind. For instance, the U.S.A., which remains an active bond market for corporates, delivers credit to the real economy in excess of 200% of the GDP. Elsewhere in China, the domestic credit to the real economy has increased from 50% to nearly 200% of the GDP presently.

Is Peer to Peer Lending the Way Out?

Amid the challenges in accessing loans from financial institutions, peer-to-peer (P2P) lending has emerged as a preferred option. Also known as social or crowd lending, it lets individuals lend and borrow money directly from each other.  In India P2P lending is regulated by the RBI with only licensed entities being allowed to operate P2P platforms.

P2P lending boosts returns for individuals who provide capital and benefits the debtor in the form of low-interest rates. As a lender, you can decide to have the P2P platform spread your funds across multiple borrowers. The lender also gets to decide the risk categories in which they wish to lend.

The platform acts as an intermediary that connects borrowers with lenders. As part of a process, the borrowers are expected to undergo a verification process by disclosing the relevant details.

Hence, lending isn't a bad activity as it might be presumed to be. It is in fact critical for growth of the economy and overall prosperity.  It acts as an important way of expanding businesses for many corporations and an instrument to usher into economic development by the governments of the world. Moreover, financial instruments like peer-to-peer lending are beaming with high expectations for credit seekers.

Impact of rising interest rates on your investments

Inflation has risen across the globe to become a pain point for policymakers who grapple with rising prices and faltering economic growth. Things seemingly turned worrisome when the Reserve Bank of India (RBI) raised the repo rate by 40 basis points on May 4 and again on June 6.  With the growing interest rates, should investors like you need to worry? What should be your strategy towards investment during such times? Let’s find out.   First, let us revisit the connection between inflation, interest rate, bond yields etc.   Inflation and interest rates are directionally related, i.e. they tend to move along the same trend but with some lag. RBI and other central banks desire positive but manageable inflation rates. A negative inflation rate or deflation means degrowth in the economy because with rapidly decreasing prices, consumers tend to pause/postpone their spends leading to slowdown in economic activity.   Fundamentally, the supply and demand...

How does IndiaP2P offer such high returns with low risk?

How does IndiaP2P offer such high returns with low risk?   IndiaP2P’s first-of-its-kind return-risk profile is the result of a unique yet large arbitrage opportunity that exists in the debt markets of emerging economies such as India.   First, let’s recap how the equity and debt markets differ. While retail investors have had access to equity investments for long, debt has been gaining in popularity over the last decade.   Read on…   We all have come across the terms debt and equity quite often. And while we may use them in the same breath, they are actually quite different. Equity is the process of raising capital by selling a portion of shares from the business.  For example, you receive a certain amount of capital infusion in your company in the form of equity. This means that you don't have to repay the amount later. However, the investor receives a portion of shares. Hence, they will receive profits in sync with their...

Have more questions? Click here to schedule a quick call with our investments team